The picture to the right depicts Rudolf Kalman, a pioneer of modern control, receiving the presidential medal of freedom from president Barack Obama. 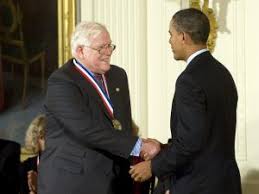 The setting which Kalman considered, and has been a cornerstone of modern control, is that of stateful time-series. More precisely, consider a sequence of inputs and outputs, or measurements, coming from some real-world machine
\(x_1,x_2,ldots,x_T,\ldots   \ \ \Rightarrow  \ \ \ y_1,y_2, y_3 , \ldots, y_T , \ldots\) Examples include:

Such systems are generally called dynamical systems, and one of the simplest and most useful mathematical models to capture a subset of them is called  linear dynamical systems (LDS), in which the output is generated according to the following equations:

Here \(h_t\) is a hidden state, which can have very large or even infinite dimensionality, \(A,B,C,D\) are linear transformations and \(\eta_t,\zeta_t\) are noise vectors.

This setting is general enough to capture a variety of machine learning models previously considered in isolation, such as HMM (hidden Markov models), principle and independent component analysis, mixture of Gaussian clusters and many more, see this survey by Roweis and Ghahramani.

Alas – without any further assumptions the Kalman filtering model is non-convex and computationally hard, thus general polynomial time algorithms for efficient worst-case prediction were not known, till some exciting recent developments I’ll survey below.

If the linear transformations \(A,B,C,D\) are known, then it is possible to efficiently predict \(y_t\) given all previous inputs and outputs of the system using convex optimization. Indeed, this is what the Kalman filter famously achieves, and in an optimal way. Similarly, if there is no hidden state, the problem becomes trivially convex, and thus easily solvable (see recent blog posts and papers by the Recht group further analyzing this case).

However, if the system given by the transformations A,B,C,D is unknown, recovering them from observations is called “system identification”, a notoriously hard problem. Even for HMMs, which can be seen as a special case of LDS (see the RG survey), the identification problem is known to be NP-hard without additional assumptions. (Aside: HMMs are identifiable with further distributional assumption, see the breakthrough paper of Hsu, Kakade and Zhang, which started the recent tensor revolution in theoretical ML).

In the face of NP-hardness, state-of-the-art reduces to a set of heuristics. Amongst them are:

This is where we go back to the convex path: using the failsafe methodology of convex relaxation and regret minimization in games, in a recent set of results our group has found assumption-free, efficient algorithms for predicting in general LDS, as well as some other control extensions. At the heart of these results is a new method of spectral filtering. This method requires some mathematical exposition, we’ll defer it to a future longer post. For the rest of this post, we’ll describe the autoregressive (a.k.a. regression) methodology for LDS, which similar to our result, is a worst-case and convex-relaxation based method.

which can be solved by your favorite convex linear-regression optimizer. The fallacy is also clear: we have parameters that scale as the number of observations, and thus cannot hope to generalize.

Luckily, many systems are well-behaved in the following way. First, notice that the very definition of an LDS requires the spectral norm of A to be bounded by one, otherwise we have signal explosion – it’s magnitude grows indefinitely with time. It is thus not too unreasonable to assume a strict bound away from one, say \(\|A\| \leq 1 - \delta\), for some small constant \(\delta >0\). This allows us to bound the magnitude of the i’th matrix \(M_i\), that is supposed to represent \(C A^i B\), by \((1-\delta)^i\).

This folklore method, called an autoregressive model or simply learning LDS by regression, is very powerful despite its simplicity. It has the usual wonderful merits of online learning by convex relaxation: is worst-case (no generative assumptions), agnostic, and online. Caveats? we have a linear dependence on the eigengap of the system, which can be very large for many interesting systems.

However, it is possible to remove this gap completely, and learn arbitrarily ill-defined LDS without dependence on the condition number. This method is also online, agnostic, and worst case, and is based on a new tool: wave-filtering. In essence it applies the online regression method on a specially-designed fixed filter of the input. To see how these filters are designed, and their theoretical properties, check out our recent papers!